The General – An Origin Story 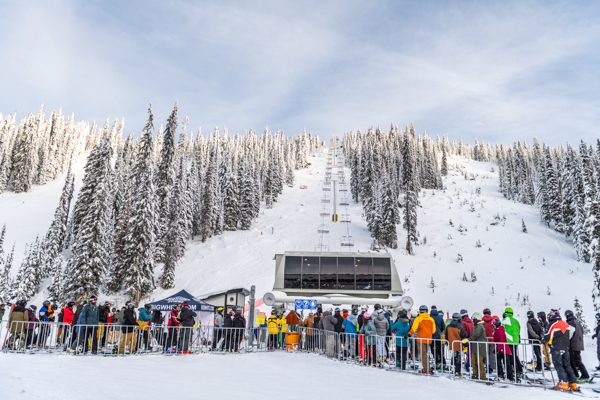 The name of Big White Ski Resort’s newest run – The General – may seem an odd choice, but those of you who have been around the mountain for a long time will know it’s a name rooted in history.

For 44 years, Jeremy “The General” Hopkinson, Big White’s Director and Vice President of Outdoor Operations, has been a fixture at the resort. And now, just years from retirement, his commitment to everything Big White is being recognized – and done so in a way that honours a sport he loves.

“I’m pleased,” Hopkinson says. “It’s kind of like a legacy that gets to be left. And it’s obscure. I like that better. Nobody really knows what ‘The General’ really is.”

This nickname has been around for nearly 30 years, and while Hopkinson says it’s because he is, as he describes, “ornery,” it reportedly stems from an incident in the late 80s. The Alpine T-bar was being moved to its current position, and Hopkinson’s team was digging the footings for the new towers. At some point, Hopkinson stood on a rock and began relaying orders to the crew. One of his workers started calling him The General – and, it stuck. Since then, the nickname has become a one of respect: admiration for a boss whose wealth of experience has, time and time again, made him the go-to person on the mountain.

“Someone will ask me something, and I’ll say, ‘What does the General want?” says Eric “Bobo” Bobert, the lead hand of Mountain Operations. Bobo has worked on the hill for 27 seasons and says when it comes to outdoor operations, Hopkinson’s opinion is the one that matters most.

“He takes care of everything outside, and we do what he wants us to do. We make it look and act how he wants it to look and act. We are all people in the army, and he’s our general. He’s in charge. It’s that simple.”

Nineteen-year-old Hopkinson took a job on the mountain as a labourer in the summer of 1975. He helped build a lift called the Easter Chair – which was moved in the mid-80s and replaced in the early-90s – as well as the old day lodge, the Alpine Centre, which no longer exists.

That winter, he stayed on as a lift attendant and by 1979, had worked his way up to Vehicle Maintenance Manager. “I basically grew up here,” he says.

It was in 1979 the resort installed the original Powder Triple Chair. There was debate over where the lift would be placed, but eventually, it found it’s home just slightly off of where the new Powder 2.0 Quad Chair, which opened December 14, 2018, currently sits.

There were two things that made the original alignment less than perfect: the fact that when skiers and boarders unloaded, they had to go up a hill to reach the west side of the mountain; and, that it never had ski-under clearance, meaning the lift line would never be a legitimate run.

The new alignment was an option considered back in 1979, and one supported by Hopkinson. “It’s like everything,” he says, “you build something, you put it together, and then you go, ‘Gee, I wish I would have tweaked it a little bit.

“So that’s what we’ve done. We’ve tweaked it a little bit.”

At the time the old Powder Chair was installed, the lift line had the best fall line – meaning the path a beach ball would take if you let it go at the top of the run – of all the runs off that lift.

With the new alignment, and now a name, the lift line is officially a run. A black diamond, The General is not a groomer – it’ll be similar to Flagpole, says Hopkinson. It’s steep. It’s narrow. It has beautiful glades on either side. And it’s fun.

With this brand new chair, and now, 119 runs, Big White has grown exponentially since Hopkinson started over four decades ago. And even though the mountain has become a “bit of a player, it’s still considered small,” he says. “It’s still got the feel; it’s got the family.”