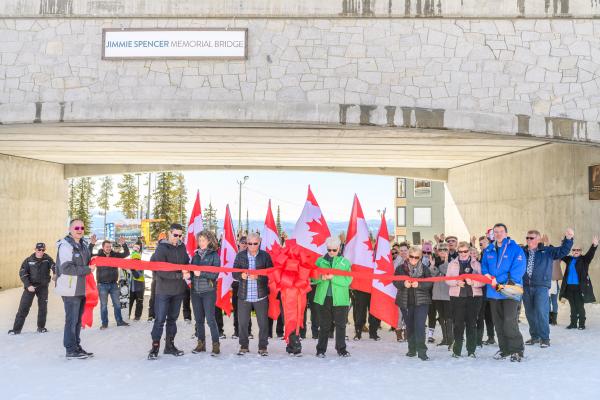 On Sunday, March 17, Big White Ski Resort Ltd. honoured the life and legacy of Canadian ski legend Jimmie Spencer with a special bridge dedication ceremony. The skier bridge over Hummingbird run was named the “Jimmie Spencer Memorial Bridge,” with a plaque commemorating the man who developed the Canada West Way.

"I had the privilege of meeting with Mr. Spencer and my grandfather, my uncle, and a few times on my own," says Peter Plimmer, president and CEO of Big White Ski Resort Ltd. "I left every meeting knowing more about our industry and how important it is to maintain a long-term vision for growth of a mountain resort. Our family is honoured to name the Village bridge in memory of Mr. Jimmie Spencer."

Jimmie Spencer, who passed on July 16, 2018, moved to Canada from Great Britain in the 1970s and took over the helm of the Canada West Ski Areas Association (CWSAA) in 1979 – a position he held until 2011. During his tenure, he developed strong and lasting relationships between ski area operators, industry leaders, governments and winter sports enthusiasts throughout Western Canada.

"Few people have influenced and propelled the Canadian ski industry as did Mr. Jimmie Spencer,” says Christopher Nicolson, president and CEO of CWSAA. “And, few leaders have mentored so many personal lives for the better. Jimmie challenged us to be better than we thought we could be. His legacy will continue through the future leaders of our industry." 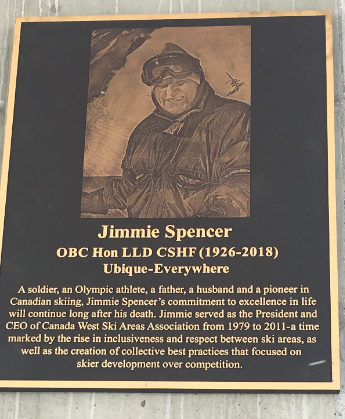 “As a family, it’s absolutely amazing,” Spencer’s wife Andy says. “It justifies everything he stood for his entire life.” Spencer wasn’t concerned about the marketing side of the ski industry, his wife adds, but in “making the ski areas work cohesively.”

“If you learn to ski on your small, home hill, and then go to a larger resort, there’s been a link,” she says.

In 2011, Spencer was inducted into the Canadian Ski Hall of Fame for his limitless contributions to the development of winter sports in western Canada.

Spencer served in the British Army for 32 years, and represented Great Britain in cross-country skiing at the 1952 and 1956 Olympic Winter Games. Spencer’s European background also influenced the way resorts developed in Western Canada. “Dad got them thinking of the European flavour of skiing,” says his son Iain. “You know, walk to the lifts, that kind of stuff.”

The concept of a ski-in-ski-out Village, like that of Big White’s, was encouraged by Spencer.