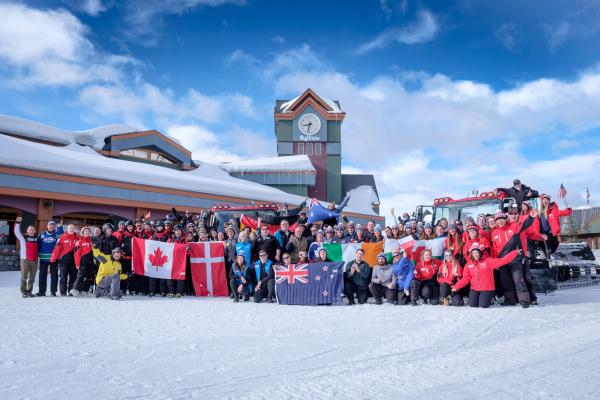 When you visit Big White Ski Resort, you’ll interact with a lot of the resort’s employees – from ticket officers to Ski & Board School instructors to restaurant servers and more. Each one has a name tag that includes their hometown and country – and this year, you can find 27 different countries on those name tags.

Including Kids’ Centre ski and snowboard instructor Joshua Smith, whose name tag will tell you he’s from Brisbane, Australia. In his second season at the resort, the 23-year-old first came to Big White when he was 11 and took lessons through the Ski & Board School. He says that’s a major reason why he wanted to work at Big White over other resorts.

And, Smith says, the experience has been “life changing! I came over knowing no one and have made more friends than I can count – some that I’ll be friends with for life.”

“One of the greatest attractions and advantages that we have at Big White Ski resort is our snow. Tourists come from all over the world to experience Okanagan Champagne Powder and so do those looking for employment,” says Michael J. Ballingall, Senior Vice President at Big White Ski Resort Ltd.. “We are lucky to have such a magnet to attract team members from so many different nationalities and cultures it really makes us an international resort situated in the heart of supernatural British Columbia.”

Not only do these employees get to enjoy Big White’s famous snow ghosts, views and powder, they also use their days off to explore the rest of the Okanagan. “I’ve been fortunate enough to be able to travel to surrounding resorts in BC and ski for free due to our reciprocal lift pass deal through Big White,” Smith says. “Definitely a plus – being able to drive through the province to all these cool places.”

After the season, Big White’s international employees often either go home, or continue exploring our beautiful country – with a number of them spending their summers working in tourist destinations such as Banff or Blue River.

Of the 27 countries represented by Big White employees, unsurprisingly, Australia comes in at number one, with 37 per cent, or 362, staff members calling the land down under home. Canada ranks in at number two, followed by the United Kingdom. But, the resort also have smaller countries represented, such as Estonia, Slovakia and the Bahamas. Fin the full breakdown, below.

“No matter where you are from,” Smith says, “everyone always has something in common, no matter how many barriers there are. I love being able to work with people who live on the other side of the globe and speak languages I can’t even begin to comprehend.”

On top of being a destination for staff, Big White also attracts ski and snowboard visitors from around the world. Thirty percent of Big White’s skier visits and 42 per cent of our overnight visits are from outside BC.