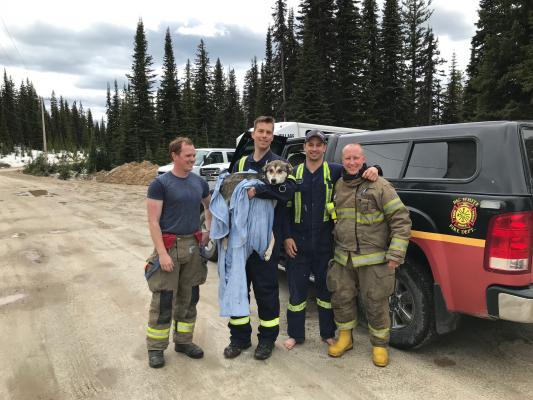 Stranded on ice, cold, hungry and unable to swim, a Big White sled dog narrowly escaped death thanks to a hiker and the Big White Fire Department. On Monday afternoon, around 2:30 p.m., a hiker spotted the dog – which had been missing from Candle Creek Kennels for five days – out on the ice at Lake Paul, next to the Powder Chair.

“He called 911 and we were paged out,” says Big White Fire Chief James Svendsen. “Basically, one of our guys swam out and got the dog. We harnessed him all up and he swam out with a rubber tire inner tube, put the dog in it, and brought him back to the shore.”

Once the dog was brought to shore, the team wrapped him in blankets and put him in a heated truck. Within 20 minutes, he started warming up. “Time was of the essence,” Svendsen says. “He was very stressed. I would say hypothermia was setting in. [The dog] would have died out there for sure.

“After he started warming up you could see the life coming back into his eyes.” 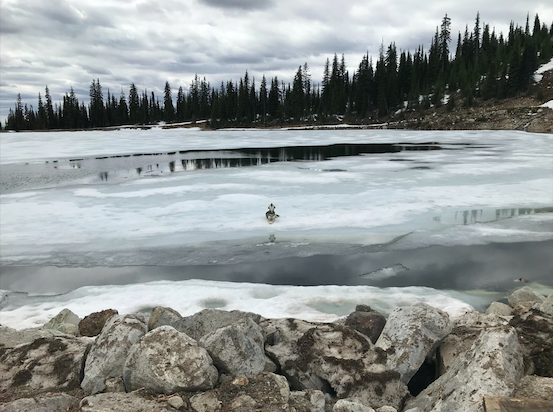 The crew then brought the dog back to its owners, who were ecstatic and very thankful to be reunited with the dog they thought they had lost for good.

If it had been a more technical rescue, Svendsen says they would have had to call a Kelowna department to assist in the recovery. Although the team doesn’t often do ice rescues, two of Big White’s firefighters are trained in basic ice rescue, and all are fully trained firefighters.

While this story has a happy ending, Svendsen wants to remind hikers coming up to Big White to stay on open trails, and to keep their dogs on leash while at the mountain. “It’s very dangerous up here right now,” he says. “There’s a lot of water running under the snow and the ice. Dogs off leash, they go running, and there’s lots of wildlife, so if they get distracted, they could easily fall through.”

You can opt-out at any time by clicking on the unsubscribe link included on our newsletters.